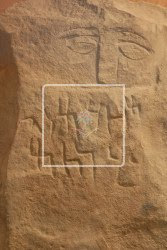 Three hundred works reveal the archaeology and the history of the kingdom of Saudi Arabia from prehistoric times to the dawn of the modern world.

This exhibition offers a journey through the heart of Arabia, orchestrated by photographs of the region's sumptuous landscapes. It takes the form of a series of stopovers in some of the peninsula's extensive oases, which in ancient times were home to powerful states or which, beginning in the 7th century, became Islamic holy places. The three hundred items chosen, most of which have never left their country of origin before, provide an original panorama of the different cultures that succeeded each other within the kingdom of Saudi Arabia from prehistoric times through the dawn of the modern world.

They reveal in particular the little-known past of a dazzling, prosperous Arabic world now being gradually discovered by archaeologists. Moving Neolithic funerary stelae, colossal statues of the kings of Lihyan (6th – 4th century BC), and silver tableware and precious jewelry placed in tombs testify to the dynamism of this civilization. Despite a hostile natural environment, the inhabitants succeeded in taking advantage of their country's geographical situation as a crossing point for the roads linking the shores of the Indian Ocean and the horn of Africa to Egypt, Mesopotamia, and the Mediterranean world. Early in the first millennium BC this trans-Arabian trade flourished, bringing prosperity to the caravan cities and permeating the local culture with new fashions and ideas from the great neighboring empires.

The second section of the exhibition highlights the role of Arabia as the cradle of Islam. The roads became crowded with pilgrims as well as traders; a first group of exhibits evokes the pilgrim paths and Al-Rabadha, one of the principal stopping-places. Following this road as far as Mecca, a second group comprises a selection of funerary stelae illustrating the evolution of writing and ornamentation between the 10th and 16th century and providing precious information on Meccan society at the time. Muslim sovereigns vied with each other in their generosity towards holy places, with buildings and such ventures into embellishment as this monumental door from the Ka’ba, the gift of an Ottoman sultan.
___________________
References: