A friend sent me a magazine article about the real criminal aspects of polygamy (in Canada). As an anthropologist I think that criminalizing polygamy is absurd. However, its already in the criminal code (Section 293).

The article is here: Mcleans Article.

I read an interesting ebook at Wikibooks about the anthropological approach to the whole topic of marriage. You can read it here.

I think its interesting that they use the Mormon Church as an example of Polygyny. It is probably used because its in a more localized context.

Polygamy is actually the world's number one form of marriage. Although the numbers are perhaps waning throughout the world due to globalization and cross-cultural contamination, it is still permissable in many societies for many reasons. Note that even though it is allowed, not all participants in the society do it, but for permissability, it is broadly recognized and supported.

In the didja know category:

Ontario, Canada had legalized polygyny. (I don't know if it's still allowed or not).

In certain tribal regions of Africa a woman will refuse to be the first wife. She wants to marry a man who shows experience and ability and that means that he has demonstrated that with at least one wife.

While North America has almost universally banned it, it still allows a married man to carry on extra-marital affairs, without any consequences. Well at least unless until the wife finds out.....


After writing about the joy of language, I thought I would take some time and examine different languages. So beginning at the front of the English alphabet, I chose Arabic. I know there are other "A" languages, but I find this language intriguing.
General Arabic Grammar

Nouns in Literary Arabic have three grammatical cases (nominative, accusative, and genitive [also used when the noun is governed by a preposition]); three numbers (singular, dual and plural); two genders (masculine and feminine); and three "states" (indefinite, definite, and construct). The cases of singular nouns (other than those that end in long ā) are indicated by suffixed short vowels (/-u/ for nominative, /-a/ for accusative, /-i/ for genitive). The feminine singular is often marked by /-at/, which is reduced to /-ah/ or /-a/ before a pause. Plural is indicated either through endings (the sound plural) or internal modification (the broken plural). Definite nouns include all proper nouns, all nouns in "construct state" and all nouns which are prefixed by the definite article /al-/. Indefinite singular nouns (other than those that end in long ā) add a final /-n/ to the case-marking vowels, giving /-un/, /-an/ or /-in/ (which is also referred to as nunation or tanwīn).

Verbs in Literary Arabic are marked for person (first, second, or third), gender, and number. They are conjugated in two major paradigms (termed perfective and imperfective, or past and non-past); two voices (active and passive); and five moods in the imperfective (indicative, imperative, subjunctive, jussive and energetic). There are also two participles (active and passive) and a verbal noun, but no infinitive. As indicated by the differing terms for the two tense systems, there is some disagreement over whether the distinction between the two systems should be most accurately characterized as tense, aspect or a combination of the two. The perfective aspect is constructed using fused suffixes that combine person, number and gender in a single morpheme, while the imperfective aspect is constructed using a combination of prefixes (primarily encoding person) and suffixes (primarily encoding gender and number). The moods other than imperative are primarily marked by suffixes (/u/ for indicative, /a/ for subjunctive, no ending for jussive, /an/ for energetic). The imperative has the endings of the jussive but lacks any prefixes. The passive is marked through internal vowel changes. Plural forms for the verb are only used when the subject is not mentioned, or is preceding it, and the feminine singular is used for all non-human plurals.

Adjectives in Literary Arabic are marked for case, number, gender and state, as for nouns. However, the plural of all non-human nouns is always combined with a singular feminine adjective, which takes the /-ah/ or /-at/ suffix.

Pronouns in Literary Arabic are marked for person, number and gender. There are two varieties, independent pronouns and enclitics. Enclitic pronouns are attached to the end of a verb, noun or preposition and indicate verbal and prepositional objects or possession of nouns. The first-person singular pronoun has a different enclitic form used for verbs (/-ni/) and for nouns or prepositions (/-ī/ after consonants, /-ya/ after vowels).

Nouns, verbs, pronouns and adjectives agree with each other in all respects. However, non-human plural nouns are grammatically considered to be feminine singular. Furthermore, a verb in a verb-initial sentence is marked as singular regardless of its semantic number when the subject of the verb is explicitly mentioned as a noun. Numerals between three and ten show "chiasmic" agreement, in that grammatically masculine numerals have feminine marking and vice-versa.
(source: Arabic Language Grammar)

Focusing in on the Nitty Gritty aka Triliterals
The roots of Arabic are similar to other Semitic languages like Hebrew, Aramaic, etc. The roots are characterized by a sequence of consonants or "radicals" (hence also the term consonantal root). Such abstract consonantal roots are used in the derivation of actual words by adding the vowels and non-root consonants (or "transfixes") which go with a particular morphological category around the root consonants, in an appropriate way, generally following specific patterns. It is a peculiarity of Semitic linguistics that a large majority of these consonantal roots are triliterals (although there are number of quadriliterals, and in some languages also biliterals). (source: Wikipedia)

The majority of Arabic words are based on 3 consonants. In addition, words are composed of three elements: prefix, stem and suffix. Red below indicates the root consonents and green indicates a prefix and/or suffix used to determine a particular morphology.

For example: K-T-B (to write): k-t-b conveys the idea of writing. Addition of other letters before, between and after the root letters produces many associated words: not only "write" but also "book", "office", "library", and "author".

More Notes on Arabic Grammar
The normal word order of a sentence is verb/subject/object. The function of nouns in a sentence can also be distinguished by case-endings (marks above the last letter of a word) but these are usually found only in the Qur'an or school textbooks.

Feminine nouns add the suffix …aat to form the plural but masculine nouns generally have a "broken" plural which involves changing vowels in the middle of the word: kitaab ("book"); kutub ("books").

Arabic has very few irregular verbs and does not use "is" or "are" at all in the present tense: "the king good" means "the king is good". Subtle alterations in the basic meaning of a verb are made by adding to the root. These changes follow regular rules, giving ten possible "verb forms" (though in practice only three or four exist for most verbs. The root k-s-r produces:

form I kasara, "he broke"

Basically, for Arabic language learning, knowing the root helps to facilitate learning the vocabulary. If you know the roots, you should be able to derive meanings based on the placement of prefixes/suffixes.
Want more roots? Check out this site. It lists a whole bunch of roots.
ما سلام
Posted by C'est Moi - Selina at 8:18 PM No comments:


I am passionate about languages. Languages are the window to the culture of the people who speak them. You can learn a lot about the soul of the nation through their language.

It was the grandfather of Charles Berlitz, Maximilian who developed the way we learn languages today. The “Direct Method” of learning uses the target language as the medium without using the student’s own language. Charles later developed the audio-lingual method for learning through listening and speaking.

Western language learners are familiar with wrestling with gender-based nouns related to vocabulary. However, this is not a universal convention of language. Cree language uses animate and inanimate instead. 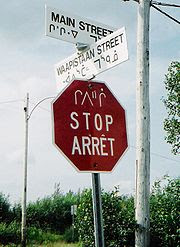 Cree is also known as Cree-Montagnais or Cree-Montagnais-Naskapi. It is related to the Algonquian language and is spoken by approximately 117,000 people across Canada.

In Cree, instead of gender the referee is to the possessing, or, not possessing, life. Nouns are Animate or Inanimate. Some objects not having life are treated as Animate and the verb form for the animate is used.

Source: A Cree Grammar
For example:

A word or group of words used as the name of a class of people, places, or things, or of a particular person, place, or thing.

Stone/rock = asiniy
Pipe = ospwakan
Sock = askikan
There are certain items that will be in the animate category while other items of the same, fall in the inanimate category. Consider the following examples:
Some berries that are inanimate while other berries are animate:
Saskatoon berry = misáskwatómin (ni)
Goose berry = sápómin (ni)
Apple = caspimin/wásaskwécós (ni)
Strawberry = otihimin (ni)
Raspberry [s] = ayoskan [ak] (na)
Grape [s] = sóminis [ak] (na)

Why? Why the change? Why the discrepancies?

(This article is written in regards to Ojibwe, but the rulings are also transposable to Cree)

“In an analysis of Cheyenne animate terms, a language related to Anishinaabemowin, Strauss and Brightman 1982 claimed that objects within the Algonquian worldview that are considered to have "power" are grammatically animate. Things have power by virtue of either being alive or being viewed as especially "sacred things." Yet there are many objects that Ojibwe people treat as animate, such as snowshoes and pants, which do not seem exceptionally sacred in their cultural evaluation.

The anthropologist Regna Darnell has claimed too that "power" is the primary reason for including items in the animate class of nouns in Cree, though the reason that something has power can be associative. Darnell claims that hides of animals are animate because in some way the hide retains the power of the animal, but meat and bones don't. Darnell claims that pants are animate because anything associated with procreation will be animate, and because pants have close contact with reproductive organs. In the Cree that Darnell was studying many body organs associated with procreation are animate, though most body parts are inanimate.” Source: Nouns – Gender (Animacy)

But the rules are not hard and fast. There has to be subtleties lost on the non-Native speaker of Cree. When you crawl into the language and start to feel your way around, perhaps you will have the opportunity to see that cultural artifact that defines the differences.