The Mysterious Missing Eruption of 1258 A.D. 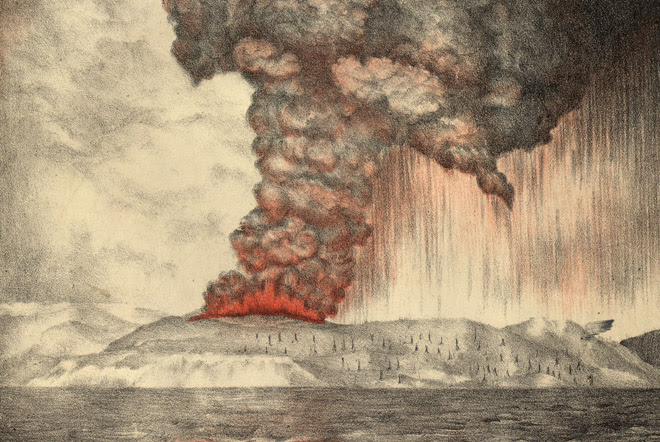 Over the last few weeks, we’ve seen a number of high-profile studies come out looking at global climate that refer to a mystery. According to ice core and sediment core records from many places on the globe, there was a very large volcanic eruption in 1258 A.D. — so big that it injected somewhere between 190-270 megatonnes into the atmosphere (to put in another way, it produced between 300 and 600 megatonnes of sulfuric acid). This would make the 1258 eruption ~8 times larger than Krakatau in 1883 and two times larger than Tambora in 1815 (when comparing their sulfate injection mass; Emile-Geay et al., 2008). So, how does the geologic community (or historical community for that matter) not have any record of such an massive eruption that happened less than 800 years ago?

First, I should discuss a little bit of the evidence for the 1258 A.D. eruption. As mentioned above, there is a record of increased sulfur and ash particles in ice cores from both the North and South Poles, along with other places such as sediment from Lake Malawi (Emile-Geay et al., 2008). Now, many of these ice cores and sediment records have been dated, so we can correlate them across the globe (within error). The combined data points towards an eruption that occurred in 1258 (or possibly 1259) – in fact, based on some of the weather records from Europe, the date could be constrained to between January and mid-May 1258 (Stothers 2000). The fact that the record of the eruption is found in both poles in the same year (based on the ice chronology) means that the eruption was likely in the tropics as well. So, based on these proxy records (i.e., indirect evidence for the eruption), we can safely say that the tropical eruption was likely during 1258 A.D. – and the missing eruption produced pronounced global temperature anomaly associated with it.

Stothers (2000) does an excellent job listing all of the possible climatic effects from the 1258 eruption.. These include “dry fogs” (sulfur) over Europe during 1258 through possibly 1262 that reduced the optical depth of the atmosphere dramatically. In fact, based on historical records, the optical depth might have been as bad in Europe in 1258-1262 from this mystery tropical eruption was it was during the much-closer Laki eruption in 1783. There were also records of very cold winters and wet summers across Europe during this time period and based on modern tropical eruptions, the pattern of maximum cooling a few years after the eruption was also seen. Related to these climate fluctuations as the human consequences, such as famine and disease – Stothers (2000) mentions a number of famines and pestilence outbreaks across Europe and the Middle East during the window of the 1258 eruption. However, these events are mitigated by regional conflicts that might have also lead to famine and the spread of disease. Interestingly, Stothers (2000) and Emile-Geay et al. (2008) both discuss how the climatic effect of the 1258 eruption was less than expected for an eruption the size that the ice core record implies – they suggest that the climate effects might have been dampened by an El Niño in 1258 as well.

So, the evidence is there for an eruption in 1258 – but what are the potential options?

A few volcanoes have been implicated but not convicted for the source of the 1258 signal:

* El Chichón, Mexico: The Mexican volcano, famous for its eruption in 1982, had two significant eruptions in the general vicinity of 1258. The first was a VEI 4 in 1190 ± 150 years, the other was a VEI 5 in 1360 ± 100 years. Interestingly, Stothers (2000) mention that the ash found in the ice cores is a close match to ash collected near El Chichón, but he cautions “the match is not perfect and … glass chemistry is not a highly discriminatory diagnostic for volcanic eruptions“.
* Quilotoa, Ecuador: Another favorite suspect, Quilotoa had a VEI 6 eruption around 1280 A.D., although the date is not well-constrained. If you look at the compiled temperature curve from Mann et al. (2012), there are some dips after 1258 that could be the 1280 eruption of Quilotoa, so there is no compelling evidence to make this eruption ~20 years younger.
* Harrat Rahat and Harra es-Sawâd, Saudi Arabia: Somewhat dark horse candidates, these two volcanoes in the Saudi Arabian peninsula had eruptions in 1256 and 1250 ± 50 years, respectively. However, both were relatively small – VEI 3 – but if they were sufficiently sulfur-rich eruptions like Laki (Harrat Rahat was a basaltic fissure vent) you could produce significant aerosols. What works against these eruption is the idea is the size of the eruptions as it is difficult to envision getting the material high enough into the atmosphere to disperse, unlike larger plinian or ultraplinian eruptions.

What are some other options?