Esperanto, Klingon, Blissymbolics and 900 others: why we invent languages

This is an interesting podcast from PRI. There is a link to the podcast as well as other links of importance at the end of the article. Then I've provided some examples of some of the languages mentioned.

In this week’s podcast [1], a converation with Arika Okrent [2], author of In the Land of Invented Languages: Esperanto Rock Stars, Klingon Poets, Loglan Lovers and the Mad Dreamers Who Tried to Build a Perfect Language. [3]

Okrent has a linguistics background: she has a Ph.D. from the University of Chicago [4]. But her interest far exceeds the merely scientific. She submerges herself, Orwell-style, into the geeky subcultures of invented language societies. Okrent holds a first-level certification in Klingon [5]. That required cramming 500 words of this made-for-the-movies language during a Klingon convention [6] that she went to. And this was no ordinary convention: attending it meant sitting next to sci-fi-monster-bedecked people who insisted on ordering meals at restaurants in Klingon. And what words! Just try speed-memorizing terms like Qatlh, ngeD and wlgh. Those words mean difficult, easy and genius. The Klingon word for hangover is ‘uH.

Okrent tells many stories of people who dreamed up languages that would replace our own bastard tongues. In that sense Klingon is a small sub-set: its function was at least originally limited to a fictional universe; it was never intended to be used in the real world. Not so Esperanto [7], the most reknowned of the “real” artificial languages [8]. Most invented languages are unmitigated failures, consigned to obscurity almost as soon as they are born. Esperanto is a rare exception — it’s both a failure and a success. It’s a failure because it didn’t meet the outrageously lofty objective of its author Ludwik Zamenhof [9]: to become a universally spoken global language. But Esperanto also succeeded because over time, it has become a living language. It’s still around today [10], more than 120 years after its conception, and it has even evolved with usage.

Klingon and Esperanto are just two of dozens of languages Okrent discusses, from John Wilkins [11]‘ 17th century Philosophical Language to Blissymbolics [12]and Láadan [13], a couple of 20th century attempts to fix the supposed evils and omissions of natural languages [14].

The vast majority of invented languages from Lingua Ignota [15] (c.1150) to Dritok [16](2007) languish in near-total obscurity. But they tell us much about how we think, how we do not think, and how we love to blame language for our own shortcomings.

Esperanto was designed to be extremely consistent and easy to learn. As such, Esperanto employs a grammer-coded system. Here are some examples of how it works:

-us: conditional
Ni havus interplanedan kosmos^ipon se Autonomy helpus nin.
We would have an interplanetary spacecraft if Autonomy would help us.

mal-: opposite
Malproksima (far away, distant)

re-: return or repetition
Refari (to remake)

-an: member or inhabitant
Marsano (Martian) 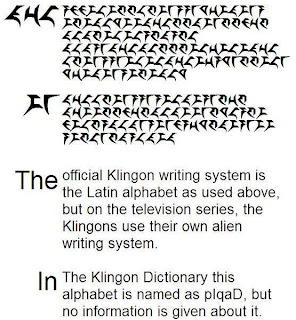 Blissymbolics is a symbolic, graphical language that is currently composed of over 3,000 symbols. Bliss-characters can be combined and recombined in endless ways to create new symbols. Bliss-words can be sequenced to form many types of sentences, and express many grammatical capabilities. Simple shapes are used to keep the symbols easy and fast to draw.
Source: http://www.blissymbolics.org/

Notes: Láadan is a constructed language invented by science fiction author Suzette Haden Elgin. It is interesting linguistically because it aims to eliminate the perceived sexism of Western languages by including particles that allow speakers to unambiguously convey how they feel about every statement.

I wouldn't want your readers to gain the impression that Esperanto is equivalent to Klingon!

Esperanto works! I’ve used it in speech and writing - and sung in it - in about fifteen countries over recent years.

Indeed, the language has some remarkable practical benefits. Personally, I’ve made friends around the world through Esperanto that I would never have been able to communicate with otherwise. And then there’s the Pasporta Servo, which provides free lodging and local information to Esperanto-speaking travellers in over 90 countries. In the past few years I have had guided tours of Berlin and Milan and Douala in Cameroon in the planned language. I have discussed philosophy with a Slovene poet, humour on television with a Bulgarian TV producer. I’ve discussed what life was like in East Berlin before the wall came down, how to cook perfect spaghetti, the advantages and disadvantages of monarchy, and so on.

Thanks for dropping by. I'm sure readers won't see them as equivalent.

I think the whole gamut of language and communication is such a fascinating study!

I have found that Esperanto users absolutely love the language and are incredible advocates for it. Yourself included!

I absolutely love languages and have studied many (12), though my comprehension is variable. Mi ne parolas Esperanton. However, I wouldn't mind taking time to learn it in the future.

I'm interested in created languages/derived languages as a window into language evolution. This also includes derived/created alphabets for writing non-literate languages. I am also interested in manual communication, such as sign languages and gestures.

I think that the realistic choice for the future global language must be between English and Esperanto rather than an untried project. As a native English speaker, I would prefer Esperanto.

I agree that we need an international language, but a lingua franca for the World should be for everyone and not just for an educational or political elite. This is the position for English at the moment.

Your readers may be interested in the following video http://uk.youtube.com/watch?v=_YHALnLV9XU Professor Piron was a translator with the United Nations in Geneva.