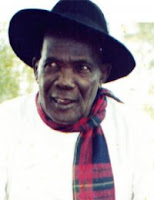 The relatives of Kenya's most prominent polygamist,
Acentus Akuku have started a Facebook page, to
connect with each other, and to get as many of them
as possible to attend his funeral. Nicknamed "Danger"
because women found him irresistibly handsome
Akuku Danger was in his late 90's when he died from
natural causes earlier this month. He married more
than 100 women in his lifetime and fathered nearly
200 children.

Now one of his grandsons, Nickson Mwanzo, has
turned to the social network Web site to convince
Akuku's children, grandchildren, and great-
grandchildren, to come together for his burial,
scheduled for December.

"IF YOU ARE AKUKU'S FAMILY PLIZ JOIN AND SAY
MORE ABOUT YOURSELF," Mwanzo writes on the page
"THIS IS TO BRING THE RELATIVES TOGETHER."

So far over 2,000 people are fans of the page, but
not all of them are relatives. Mwanzo told reporters
that the "Akuku Danger Family" page is also a tribute
to the man.

Condolences have been pouring in since his death.
One Facebook post says that Akuku left a lasting
mark, "not only among family" but with the "whole
world."

Akuku Danger was legendary in Kenya. He married
his first wife in 1939, and his second wife soon after,
becoming a polygamist at the age of 22. He's outlived
12 of his wives. He married his last wife in 1992. He
had so many children that Akuku established two
elementary schools solely to educate his children, as
well as a church for his growing family to attend.

Today those schools still exist. At one school, 72
out of the 312 students are Akuku grandchildren; the
rest are children from the community. Many of his
children have grown up to become teachers, doctors
and lawyers. In interviews Akuku had told local
journalists he was responsible for naming all of his
children, as a way to bond with them.

Mark Njagi, an accountant in Nairobi. "I would never
consider getting more than one wife since this would
be too much drama."

The widows of Akuku Danger said they have mostly
happy memories.

Damaris, who is wife number 13, told the Daily
Nation that the secret to keeping everyone happy was
treating all of his wives equally. She said he bought
all of their clothes and provided them with everything
they needed.

"He would say he wanted us to look like queens," she
said

Members of the family told Kenya's Daily Nation
newspaper that despite the clan's enormity, everyone
got along well. Son and family spokesman Dr Tom
Akuku, told the newspaper his father valued
discipline and work ethic, but was not a tyrant.

"He was very democratic," said Dr. Akuku "He
managed the large family through dialogue and
regular meetings during which we talked freely and
bonded with one another."

To Kenyans, Akuku Danger represented the ultimate
symbol of traditional manhood and of a time
when gender relations seemed simpler than today.

Over Akuku's lifetime, traditional gender roles in
Kenya have changed somewhat. While marriage is still
the ideal, Kenyan women today are not as reliant on
the institution for financial stability. There are now as
many women in universities as men, and women hold
top level positions in companies. Women are also
having fewer children than is the historical norm,
even in rural areas.

Many Kenyans said these social changes, along with
the continued modernization of Kenya's economy,
make a lifestyle like Akuku's unrealistic today.